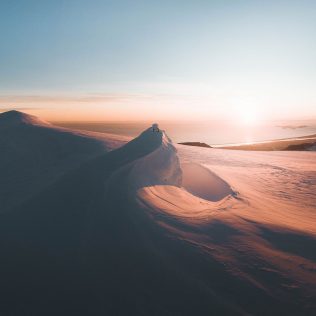 Top things to do during the Icelandic summer solstice

It’s nearing that time of year again when the Icelandic moss turns green, lupins bloom, the highlands open up, hotels all booked out, and the endless days of the midnight sun are upon us. It’s a magical time here just below the Arctic Circle, full of energy and joy, and could possibly be the best time to experience Iceland.

With just a tiny part of the Icelandic map, namely the northern finger of the island Grimsey, dipping into the Arctic Circle (defined by the geographical line where the sun doesn’t set), we still have plenty of light to bask in. For the locals coming out of the dark, cold winter at the edge of the world, it’s a very welcome change. A natural phenomenon that brings energy to the entire island, the peak of the midnight sun, better known as the summer solstice, occurs around the 21st of June each year. This is the brightest day of the year when the sun barely dips below the horizon at 00:03 and comes back up again at 02:55. It doesn’t get dark. In fact, it’s too bright to see stars here from mid-April to mid-September, but it truly doesn’t get dark during these summer weeks. So if you are here during this fantastic time, how can you best harness this power of the sun and truly experience the summer solstice? There are plenty of great options.

Go for a Road Trip

This is a given. There is no better time to see as much as you can of all the beauties this island has to offer than when you have all the daylight in the world. It can be anything from renting a car for a day to go on a day trip to Snæfellsnes, the Golden Circle, Reykjanes, or the South Coast, to going around the country for a week or more with a camper. Or why not explore the remote Westfjords, or rent a big 4×4 to discover the highlands. Make a few plans, save the locations you would like to visit on a map and head out to explore. Every day should be filled with sights and adventures you’ll want to stop for every five to ten minutes along the road (just make sure to do it in parking lots). Driving in Iceland feels like driving in a car commercial, so imagine adding hours of sunsets to that scenery, and you’ll have a fantastic time.

The only downside of travelling the midnight sun-lit roads of the Icelandic summer is that a lot of others have the exact same idea. You won’t be alone. But don’t you worry, that is what the next section is for.

Turn the day around

This might sound crazy, but in the midnight sun, it’s a perfectly sane idea. You have 24 hours of daylight. If you happen to be a tourist reading this, the only time you really have to keep is your flight home (and possibly that Blue Lagoon booking), so harness the power of the midnight sun and see Iceland like most people don’t in the “night time”. The crowds will travel at the normal hours of the day, mostly to the same places, and head back for a hotel dinner before ending the day way before it’s over. Because the days are never over in the summer.

You can use this to your advantage by not setting any alarms, waking up whenever it feels right, and start exploring the country when everyone else is on their way back. The magic of the midnight sun is that it’s at its most beautiful, golden hour, at night time. This is a great chance for both photography, and to see the land light up in a four-hour sunset-sunrise that never seems to end. Drive the roads, see the sights or go for a hike during this time. And won’t regret missing that hotel breakfast.

Journey into the Highlands

There are lots of places in Iceland that are only accessible during our very few summer months, and they contain sights and landscapes that will blow most people’s minds. These areas are great for hiking, but they are usually covered with snow until around mid-June, making the roads there impassable and the areas deserted for most of the year. Although, if you have a car equipped for these roads or book a tour to take you there, or a highland bus to drive you in, it could be one of the best experiences of your life.

Destinations like Landmannalaugar, Þorsmörk, and Kerlingarfjöll feel like driving to a different planet, just to be greeted by flourishing campsites with magical surroundings. You have to be quick to book a spot in the huts, otherwise, you can get the full experience by camping in a tent (and a very very thick sleeping bag). Again, sleep in, head out late, stay on the hiking trails until the sun starts getting high, and head to bed when the crowds start preparing their breakfasts.

Bask in a hot spring

In the land of naturally heated geothermal water, there are plenty of outdoor pools and spas around Iceland that are more than fantastic, but they usually close their doors in the evening. So to get the full midnight sun experience, it’s best to find a hot spring out in nature and plan to stay there most of the “night”. There are for example some great campsites with hot springs in the highlands, but the internet is a great tool for finding everything. Just make sure to respect the rules of landowners and leave the place as clean or cleaner than you found it. The locals will love you for that.

Party until the sun comes up

Not like in the movie Midsommar, but it’s definitely a great way to take advantage of the extra energy in the air that the midnight sun brings. Most summers (unfortunately not 2021) there is the massive Secret Solstice Festival in Reykjavik; one of the biggest music and culture festivals of the Arctic. These few days of fun and great acts have been growing fast every year and is definitely something that will keep you up for most of the nights if you need an excuse to stay awake during the solstice. There is nothing better than heading home after a great night, and the sun is already high up in the sky.

If big crowds and loud music is not your thing, there are still plenty of smaller events going on, like bonfires and barbecues all around the country.

Then you might want to come back to Iceland for another visit. The northern lights are a phenomenon that can actually occur all year round, any time of the day, but if you have never seen a northern light picture taken during the day, there is a good reason for that. It’s too bright. Northern lights can be bright, but they are no match for the power of the sun. Just like it works with stars, it’s simply too bright during the day to see any aurora activity. Since it doesn’t get dark from mid-April to mid-September, the northern lights and stars are all hiding behind the never-ending sunset/sunrise. That sunrise can look amazing too though.

The Aurora Museum or The Wonders of Iceland exhibition in Perlan can be good options to see them on a big screen though.

How to sleep during the solstice

Naturally, this is a concept that most people around the world don’t deal with frequently, and as easy as it is to lose track of time in the evenings, it might be even harder to actually fall asleep. Luckily the Icelandic people have discovered a great invention called curtains, and they are being put up available in most hotels and guest houses as we speak. If you are hypersensitive to any light source while in bed though, or if you are a vampire, it might be a good idea to accidentally pack that sleep mask from the plane with you.

This list stays almost the same summer or winter, midnight sun or total darkness. You are still coming to Iceland, and the weather is still very unpredictable. Summer usually vary between 5°C-15°C, very rarely going over 20°C (the world record in Iceland being 30.5°C), and often below freezing at night in the highlands, so pack accordingly!

Book now and save 40% on our Protection Package