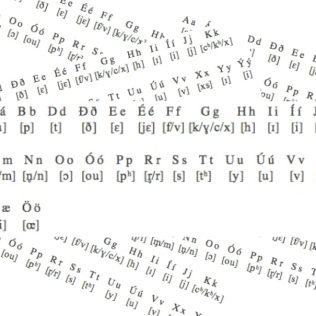 Guide to the Icelandic Language: The Alphabet and Language Basics

When you travel to a new country, learning some basic phrases in the local language is always a good idea. Although English is one of the world’s most common languages, you can’t assume that people will speak it everywhere you go. Even if locals do speak a bit of English, road signs, food menus and shop signs will typically be in the local language. Making an effort (even if you sound silly) will always be appreciated by locals and show that you respect the culture and place you’re visiting.

Luckily for tourists, Iceland is a very English-friendly country, so tourists who speak English shouldn’t encounter many problems. Still, knowing a bit about Iceland’s language can definitely help you when travelling in the country. In this article, we explore the Icelandic language, including the alphabet, some common phrases used in Iceland and tips for finding your way around.

What language do people speak in Iceland?

Iceland’s official language is Icelandic and is spoken by approximately 97% of the local population. It’s an insular language, meaning that Icelandic, at its core, hasn’t been influenced by other languages like many of the world’s other languages. This is due to both its isolation from other parts of Europe and the fact that Icelanders have evaded foreign influences to keep the language as purely Iceland as possible. Because of this, the Icelandic language hasn’t really changed since the country was originally settled back in the ninth century. Even after being under Danish rule in the 19th century and adopting many words and phrases from mainland Europe, many Icelanders replaced them with their own versions once they broke free of the Danes. Compared to other countries that often have unique dialects based on region, most Icelanders speak very similarly. Those from the capital speak with slightly softer consonants, but it’s not super noticeable.

There are 32 letters in the Icelandic alphabet, and although it might look confusing, once you know how to pronounce the letters, you will easily be able to pronounce words. That’s because Icelandic is phonetic, so words are said the way they are spelled, and no letters are silent. Compared to English, you will notice a few letters that look entirely different and a few letters missing entirely. Plus, there are versions of each vowel that have accents over them, but they are actually just there to show the letter has a different sound. The Icelandic letters include: Aa Áá Bb Dd Ðð Ee Éé Ff Gg Hh Ii Íí Jj Kk Ll Mm Nn Oo Óó Pp Rr Ss Tt Uu Úú Vv Xx Yy Ýý Þþ Ææ Öö.

Icelanders can speak English. In fact, most Icelanders are fluent in it. English is even taught in schools as a second language. Those who work in the tourism industry or deal with tourists, like restaurant/hotel staff and gas station attendants, will always speak English. And they may even speak a few other languages.

What other languages are spoken in Iceland?

Beyond Icelandic and English, there are a few other languages you may hear on your travels in Iceland. Danish is classified as a minority language in the country, although there are only about 1,000 speakers in the country. There is also a significant population of Polish speakers in Iceland (almost 3% of the population) and Lithuanian (about 0.5%). The next most common languages spoken in Iceland are German, Portuguese and Filipino, although you’ll rarely run into them.

Rent a car in Iceland in multiple languages with Hertz Iceland

One of the most important things you’ll need to navigate when arriving in Iceland is picking up a rental car. Your rental car is essential for getting around on your trip, and you don’t want to add extra stress to your trip by not being able to understand the language when trying to communicate with the rental car company. Trying to book a rental car online is even more stressful when the website is in a different language. You could end up clicking the wrong thing, or booking the wrong vehicle or dates, leading to a mess when trying to pick it up.

The Hertz Iceland website is available in Icelandic, English, Simplified Chinese and Traditional Chinese. And we are working on having even more languages available for travellers in the near future. For those wanting to rent a car long-term, such as those moving to Iceland temporarily and needing multi-month rentals, all the info is available on the Icelandic version of the website.

Knowing a few key phrases in Icelandic is beneficial when travelling the country and shows the locals that you appreciate and respect the culture. Here are some common phrases that you can use when you’re visiting Iceland:

Is Icelandic one of the hardest languages in the world?

For English speakers, Icelandic can seem incredibly difficult, but it’s not as hard as it looks. And there are definitely much harder languages out there when comparing them for difficulty. One of the reasons that Icelandic can seem hard is because of the alphabet. In English, there is a basic alphabet of 26 letters, with no accents or special characters. One look at the alphabet, and you might be confused simply by the way it looks. But the United States Foreign Service Institute has categorized all the world’s top languages in terms of their difficulty to learn for English speakers. Icelandic falls into category 3, which is “hard.” While it may not be as easy to learn as French or Spanish, it’s about as difficult as learning Hungarian, Polish, Russian or Finnish.

Because of Iceland’s isolation, the vocabulary is entirely unique, even from other Scandinavian languages. Where you might find Spanish or Portuguese words resembling English words, you won’t find that in Icelandic, meaning you essentially need to learn everything from scratch. The grammar of Icelandic can also be challenging to understand at first. That said, as Icelandic is phonetic, it’s easy to sound out the words once you know what each letter sounds like. The best way to learn some Icelandic is to ask the locals! Most Icelanders speak English and are very friendly, so I would be happy to help you learn a few new words.

Tips for finding your way around Iceland

Getting around Iceland without speaking Icelandic isn’t overly complicated, but you should know a few things that will help you navigate without stress.

You don’t need to be an expert in Icelandic to visit Iceland, but understanding a bit about the language and how it’s used can make your experience in Iceland more authentic. Say halló to people and takk fyrir to your restaurant servers, tour guides, hotel staff and gas station attendants. It’s truly appreciated by the locals and gives you an opportunity to impress your other group members! Make sure you book a rental car online and in advance before visiting Iceland. This will make the whole process much more straightforward when you arrive. If you want any advice regarding car rentals, or travelling in Iceland in general, reach out to Hertz Iceland, where staff can help you in English.

Have questions? We are here to help