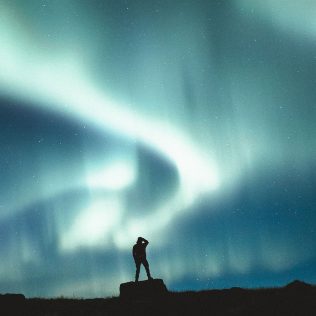 How to see the northern lights in Iceland

Everything you need to know about how to see the Aurora

Imagine the entire sky lighting up in a massive dance, bursting out in a green flame above you, swirling around your head, and waving in color. You don’t know where to look. It is everywhere. And the night is bright. Even if just for a moment.

Many come to Iceland to experience the great natural phenomenon of the Aurora Borealis, also called northern lights. Still, even though it can fill the whole sky, it’s easily missed. Finding the northern lights isn’t hard if they are out, but you have to have luck, patience, dedication, warm clothing, and more luck. The greatest way to increase this chance of catching the dancing lights in the sky is knowing how and when to look for them. So here is everything you need to know about the northern lights.

When is the best time to see the northern lights?

This question comes in two forms. There is the time of year and the time of day. Northern lights, just like stars, can only be seen when it’s dark outside. And it doesn’t always get dark in Iceland. This is why you can only see northern lights in the winter months between September and April. During this time, there is no better month than the other. November, December, and January are the darkest months, but also tend to be more cloudy.

Regarding the time of day, you can see the northern lights any time it’s dark. There is no specific time better than the other. Northern lights can even be dancing during the day, but it’s just too bright to see them. To maximize your chances though, check when the area you are in has clear skies and walk outside to have a look frequently. The sky can be dark one minute and dancing in green the next. There are good weather forecasts like vedur.is, and aurora apps like “Hello Aurora” to help you, but if you are unsure how to read it, there are plenty of tours with knowledgeable guides heading out every evening when there is a chance of seeing auroras.

You shouldn’t plan a trip to Iceland with the sole purpose to see the northern lights since this country has so much other beauty to offer. See it instead as a bonus that could show up if you come during the darker months.

Can you see the northern lights during the summer?

Just like stars, northern lights could be there during the day, but can’t overpower the brightness of our sun. No matter how spectacular they might be, you can’t see northern lights when it’s bright outside, and in summer, Iceland doesn’t get dark. Between May and August, the sun does set but it never fully gets dark, meaning that neither stars nor northern lights can be seen during these months.

Where is the best place to see the northern lights?

Northern lights can show up as a line across the sky, often to the north of where you are standing, or rarely, as an entire sky lit on fire above you. The problem is often that Icelandic weather can be very unreliable, and parts of the country could be covered in clouds for weeks without any break. So you have to go where you can see the sky. This can be as simple as walking out from your hotel or Airbnb or requiring a drive to where the nearest window in the clouds can be found. The easiest way to do this is to rent a car and look for a less cloudy area, or to have a guide who can precisely follow the weather forecast and determine where to go.

Can you see the northern lights from Reykjavik?

In short, yes! Northern lights are perceived weaker when there is a lot of light pollution around, meaning the light that is emitted from a source like a larger city, that fills the sky with a glowing yellow and blocks out the stars and auroras. Still, if the northern lights are strong, you can easily see them from the capital. The main issue is that there are buildings everywhere, and if the northern lights are not right above you, they are hidden by these tall structures. The best thing to do if you are in the city and the forecast is good is to go down to the northern shore of the city, where you have a clear view of the northern sky. Still, for the full experience, it’s a good idea to take a drive out to an open area in nature, which can be reached in as little as 20 minutes from downtown.

How to maximize your chances of seeing the northern lights

Knowing where to go and how to read the weather forecast helps a lot, but there are a few other useful tips on how to best see the northern lights. These can determine the difference between seeing them when they are out, or hearing about it the day after.

Wear warm clothing – And we mean really warm. Nights with clear skies can get really cold, and the warmer you are the longer you can stay out waiting for the sky to light up.

Keep busy – People often recommend driving out of Reykjavík because it keeps you outdoors without getting bored. Walking out of your home and looking at an empty sky for 20 minutes gets tiring pretty fast, but driving somewhere for an hour or two gives a longer time span for the northern lights to show up.

Stay longer – There is no recommended timeframe for catching a glimpse of the northern lights, but the more time you have in Iceland the higher the chance of seeing them.

Use the buddy system – The more eyes are on the sky, the higher the chance is that someone is going to catch the lights when they are out. Countryside hotels often have a call service, where the reception will call your room phone if the northern lights show up during the night. If this is not offered, you can team up with other hotel guests or friends to take turns to go outside and check frequently if there is any activity. The longer someone stays up looking through the night, the better.

Go further north – This is not only because it’s dark a little longer in the north of Iceland during the winter months, but more because the north generally has better weather, meaning fewer clouds. And also has some other amazing sights apart from auroras.

Bring all the luck you can

Still, with all this knowledge, there might be days when the sky is clear but the lights just never come and there could be others when the sky is lit but it’s all covered in clouds. And then there are occasions when you walk out of a restaurant in downtown Reykjavík and they are right above you. Visitors can spend three days in Iceland and see the auroras every night, or chase them for a month to only find clouds and stars. You still need luck, and only Thor and Odin can help with that.

A bit of luck and patience can lead to the most amazing rewards. If you get a glimpse of the northern lights or even a full-on show all across the sky, it will definitely be a night you will never forget.